“IoS-OP Seminar in Taiwan” was held in Taipei, Taiwan on 16 April by IoS-OP Consortium. Attended by around 91 professionals from Taiwan’s maritime industry at the venue virtually connected to Japan, the consortium members introduced the rule and framework for sharing IoT data of ships, including data ownership, and digital solutions from each company.

IoS-OP is a universal platform that enables the sharing of ship operation data among shipbuilders, manufacturers, and related service providers without compromising profits of data providers. The initiative has been promoted by Ship Data Center Co., Ltd. (ShipDC) under the supervision of the membership association “IoS-OP Consortium”.

IoS-OP incubated in Japan, while it has recently attracted the industry’s attention as the unique and practical platform to collect, distribute, and utilize the ship operation data. At the seminar, the consortium members’ representatives from Mitsui O.S.K. Lines, Ltd. (MOL), NYK Line, Japan Marine United Corporation, Japan Weather Association, Sunflame Co., Ltd., Japan Engine Corporation, BEMAC, JRC, ClassNK, and Ocean Express Network as the user of IoS-OP have described their digital activities powered by the data, and encouraged maritime players in Taiwan to join the initiative.

The following comments were made during the seminar:

Yoshikazu Kawagoe, Chairperson of IoS-OP Consortium (Technical Advisor, Mitsui O.S.K. Lines, Ltd.)
“IoS-OP Consortium, user-led scheme among shipping companies, shipbuilders, and marine manufacturers was launched mainly by Japanese companies, but there is no nationality requirement. Members from any country are welcome fairly as long as they follow the rule. I strongly hope that this seminar will be an opportunity to promote collaboration between Taiwanese maritime professionals and the consortium members.”

Yasuo Tanaka, Secretary General of IoS-OP Consortium (Senior Fellow, MTI Co., Ltd/NYK Line)
“Following the progress of digitalization, visualization in the maritime industry is rapidly advancing, like Poseidon Principles and Sea Cargo Charter. In this context, we believe it is important to share the rules for data handling globally, which will encourage data distribution and allow everyone to enjoy its benefits. I believe Taiwanese players’ participation in IoS-OP will contribute significantly to the future industry development.” 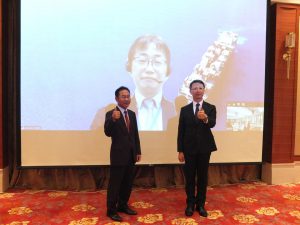 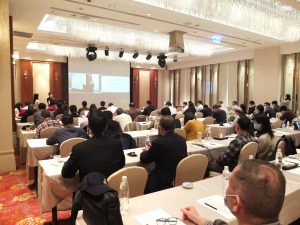